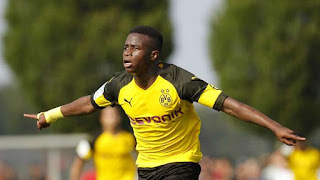 The Cameroon-born forward has been prolific in front of goal for the Dortmund U19 side with 40 goals in 23 league matches since the start of last season.

Moukoko, 15, has been named in BVB’s Uefa Champions League squad and their Bundesliga set-up this season, but he is not eligible to make his first-team debut until he turns 16 on November 20.

Cossy Ojiakor’s ex, Abel covers up tattoo of her name

Meghan Markle asks Mail on Sunday to Publish Front Page Apology and Pay up £750,000 after she Won case Against the Publication

Working for friends can be so annoying – Efia Odo