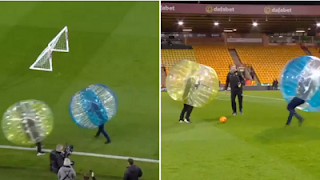 Gary Neville and Jamie Carragher took their friendly rivalry to a new place on Friday night as they put each other on their arses in a game of zorb football.

The former defenders have taken their rivalry from a heated one on the pitch to a friendly one on the screens of Sky Sports and on Friday they took it to a new sphere, literally.

Ahead of Watford’s win over Norwich on Friday the two had a friendly game of zorb football in which both men hilariously ended up on the turf, but Neville got the win in the end and it was all beautifully analysed by Carragher:

Carragher may not have been in a good mood on Friday after losing out to Neville but there could be a huge upswing in how he’s feeling on Sunday if his beloved Liverpool can beat rivals Manchester City.

The two sides battled hard for the Premier League title last season, with the Reds missing out by a point, but Jurgen Klopp’s side could open up a relatively huge nine point lead at Anfield this weekend.

Pep Guardiola’s side have already lost twice this season, and drawn with Spurs, leaving them six points behind their unbeaten rivals, whose only dropped points came in the draw with Manchester United.

This week has seen the first time that Klopp and Guardiola have started a war of words with each other, with Guardiola accusing the league leaders of diving and Klopp returning fire to mention the Champions’ knack for tactical fouls.

That’s something Carragher is happy to see, with the former Reds defender explaining in his Telegraph column, saying, “I had an immediate thought when I heard Pep Guardiola and Jurgen Klopp exchange barbed comments ahead of Liverpool against Manchester City this week: “About time.”

“I am not encouraging all-out verbal warfare between the Manchester City and Liverpool managers, but when one club is a direct threat to the ambitions of another it is obvious the tensions, frustrations and irritations one is causing the other will surface. As long as it remains within the boundaries of good taste it is hugely entertaining. There is not a football fan among us that does not love a managerial scrap.”

“That is me laughing, believe it or not!”

Last night @GNev2 and @Carra23 went head-to-head in zorb football at Carrow Road ? It was sealed with a beautiful chip. pic.twitter.com/iMyPN42Bl5

COVID-19: Governors, Deputies To Be Vaccinated On March 9th

Water Scarcity In Enugu: Long Queues Sighted In Most Parts Of The State