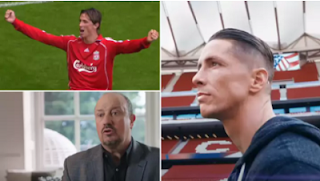 Fernando Torres’ ‘Last Symbol’ documentary releases today and it promises to be must-see for all football fans.

The retired star, best know for his stints with Atletico Madrid and Liverpool, was one of the deadliest strikers in world football during his prime.

However, ‘El Nino’ stayed out of the limelight throughout his career and not many know his story.

The documentary will put the 36-year-old’s whole life under the microscope and features interviews from the managers who knew him best.

Interviews in the documentary include former Liverpool boss Rafael Benitez and Spain national team coach Vicente del Bosque, as well as Torres himself

“This is the story of my life. So short but yet so lengthy,” Torres said per Advanced Television.

“This documentary is a journey through more than twenty years of my life and I hope the watching audience will get to know me better by watching it. It includes my good and not so good moments, unveiling some of my best-kept secrets and showing the real-life evolution of a dream come true.”

Torres’ whole career will be followed, from his debut with Atletico at a young age to his high profile transfer to Liverpool.

It was with The Reds he managed to solidify himself as a world-class number nine.

The Spaniard netted 65 goals in 102 Premier League appearances as the club came close to ending their near 20 years wait for a league title.

During his time with Liverpool, he became a focal point for Spain as they won the 2008 European Championships and the 2010 World Cup playing a sensational brand of football.

What followed was a high profile £50 million transfer to Chelsea in 2011 which didn’t go well at all.

Despite adding a Champions League and Europa League to his trophy cabinet, Torres never fit in at Stamford Bridge.

A spell at AC Milan, a return to Atletico, and venture to Japan with Sagan Tosu followed before retirement in 2016.