Femi Fani-Kayode clashed with Dele Momodu over his comment of President Buhari being the ‘father of the nation’.

The Publisher of Ovation Magazine, Dele Momodu, in a tweet which was a response to the ‘explosion’ in different parts of the country, stated that only President Buhari can stop the killings because he is ‘the father of the nation’.

“Only one man can stop the imminent explosion and that is the father of the nation, President Muhammadu Buhari” he tweeted.

The former Aviation Minister and PDP Chieftain however countered the claim, alleging that Presiden Buhari cannot stop the ‘explosion’ because he started it. He also addressed President Buhari as the ‘father of the fulanis’.

“Buhari cannot stop the imminent explosion because he is the cause of it! 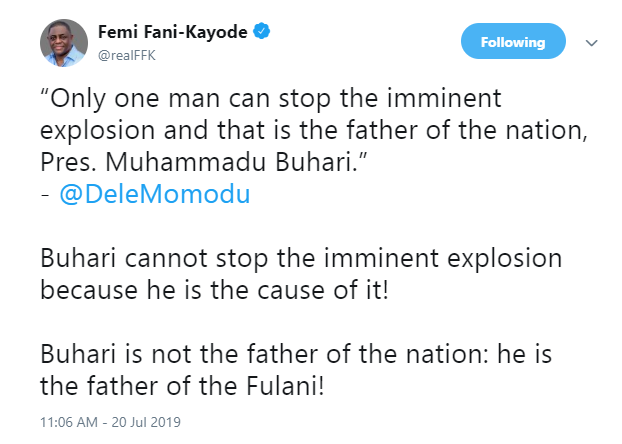 Ebuka's Parents Renew Their Wedding Vows After 50 Years Of Marriage

A private investigator has claimed that the legendary rapper Tupac Shakur is alive, living in Belize and claims to have…

Majek Fashek’s manager has revealed that Nigerian rapper, Olamide is the only artiste who supported the Rainmaker financially as he…