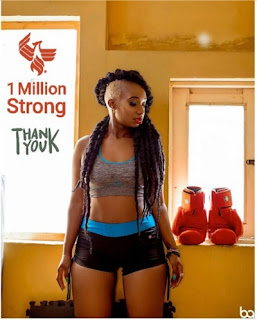 Reggae Queen, Tallia Oyando garnered 1 million+ followers on Instagram, but a section of fans were quick to body shame her instead.

Taking to her Instagram, the media personality decided to flaunt her toned body, donning a gym bra and tight booty shorts that curved out her figure. 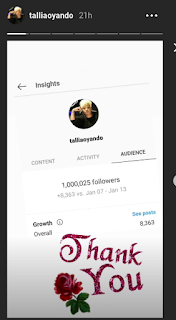 ‘1 Million Organic Followers 🎊🎊🎊 thank you so much. Appreciate you. Love Always #NightNurse’

Love was sent all the way as followers lauded a job well done and charged up to celebrate her victory.

‘You kick-ass daughter of mine. Loooove you ❤️🎉🍾’

‘Yes!! Congrats #NightNurse and much love to your followers. 👑👑👑’

‘Where are we collecting the appreciation hampers for being awesome followers 😜😂😂😏’

However, it turned into a heated debate when a female follower @gracekiiru51 decided to comment:

‘no curves but nice shape 😍

But fans were not going to take that with a pinch of salt. According to followers, Grace was actually being ´soft rude´ and it wasn´t any bit right.

Others were not going to sugarcoat her ego, instead quickly bashed:

‘@gracekiiru51 giiiirrrrl… if you want to give someone a compliment, you don’t have to point out what they have/don’t have.. I saw you also on @millychebby‘s post… you can just say the nice thing without adding the negative 😏

We are all about good vibes here 💯🤗’

Looks like Grace is consistently a ´soft rude´ follower on the comment section of many other female celebrities.

And Tallia came out to speak her mind expressing:

‘@gracekiiru51 I’ve seen you comment the same on other women and ladies posts … “Reduce your arms but you look good. No curves but nice shape. Tummy but you look cute” it is soft rude as @keithokondo said. I’m ok with it but you can’t be giving ladies such comments you put em down and make yourself feel better with a “but it’s nice” comment.’

‘@gracekiiru51 I thought this is what we ar all looking for. A nice, well-toned body and Talia really works for it. If you really wanted to say something about her body, it would have been to appreciate her efforts. Seriously if I was given this body I wouldn’t sleep for the fear that someone might steal it. You look good Talia’

And just to remind Grace, in case she forgot, a follower commented:

As fans posed to the night nurse:

‘@talliaoyando why are u even replying to someone who can’t publicly stand behind their words. Like they can even be half the woman u are. Smh!’

‘Forget about their negative energy, you looking super fine….’

The Mum-Of-Four Posted The Adorable Video On Social Media

Burna Boy Calls Out MTV Base

50 Cent Calls Out Floyd Mayweather On Instagram, Shares Chat Messages Between Them