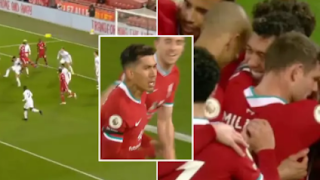 Liverpool players ran to celebrate with Roberto Firmino after the Brazilian broke his goal drought during Sunday’s 3-0 win over Leicester City.

The Reds played a weaker XI thanks to their injuries but still managed to get the job done at Anfield.

What will have pleased manager Jurgen Klopp most was the team spirit shown when Firmino headed home.

Firmino wheeled away in celebration and all his teammates followed, giving him a massive group hug.

It was a complete performance from Firmino and Klopp expressed his delight in a post-match press conference.

“You could see in the face of all the players when he scored that everybody thought, ‘Yes, exactly the right goalscorer’.”

Firmino’s header added to a Jonny Evans own goal and Jota strike in the first half.

Among the names missing from a much changed Liverpool were captain Jordan Henderson and Mohamed Salah, while defensive duo Virgil van Dijk and Joe Gomez are out long term.

Naby Keita looks to have joined them on the treatment table and Klopp hit out at broadcasters for this season’s congested fixture list.

In an unaired interview clip, the German fumed: “It was never about us when I spoke about it.

“It’s about all the players, England players, players who play next summer in the European Championships.

“Sky and BT have to talk because if we keep playing Wednesday and Saturday at 12:30, I’m not sure if we will finish the season with 11 players.

“All the top six or seven. But I know you don’t care. It’s really difficult for the players, that’s what is difficult. The rest is just a decision on a desk in an office. That sounds not difficult for me.

“People tell us to rotate – who? We have offensive players to rotate, yes, the rest are kids. Stop talking and start making decisions.

“If somebody tells me again about contracts I’ll go really nuts. Contracts are not made for a Covid season. We all have to adapt.

“You adapt, we adapt, you’re standing here with a facemask – we adapt to the situation. So everything changed.

“But the contract with the broadcasters is: ‘No, we said we have this, so we keep this.’ Everything changed, the whole world changed.”

Liverpool have moved to second in the Premier League, level on points with Tottenham Hotspur.

The entire team celebrates Bobby’s goal. This is the content we need❤️#LFC #YNWA