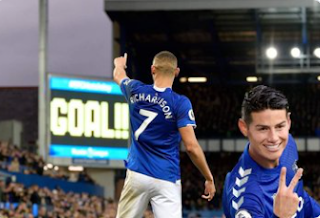 Everton number seven Richarlison posted an image of himself to Twitter on Sunday night – with many fans thinking it was mocking Liverpool for their devastating 7-2 loss to Aston Villa.

The Premier League champions were stunned at Villa Park as an Ollie Watkins hat-trick helped put the home side 4-1 ahead at half-time.

Many expected Liverpool to grow into the game but Dean Smith’s side ramped up the pressure even higher to secure a historic victory.

Immediately after the game, Brazilian forward Richarlison shared a picture of himself from the back, meaning his shirt number was completely visible.

Fans are convinced the 23-year-old did it on purpose in a huge dig at his side’s bitter rivals.

The Toffees are currently top of the league after winning all four of their games so far this season.

Meanwhile, Liverpool became the first reigning champions to concede seven goals in a league game since 1953, and manager Jurgen Klopp was left shocked on the sidelines.

He told BBC Sport following the game: “It looked like we lost the plot after it went to 1-0.

“Years ago we told ourselves we wanted to create history. That was history but obviously the wrong type.

“We had big chances which we did not use, but when you concede seven I’m not sure you can say it would have been 7-7.”

Injury to first-choice goalkeeper Alisson in the week meant Adrian start in goal and he made a number of mistakes.

“We made too many mistakes and massive ones obviously,” the German coach continued. “It started with the first goal and around the goals we made massive mistakes.

“We lost balls in the wrong area and did not protect properly. It looked like we lost the plot after it went to 1-0. It is not an excuse.

“Normally you can be 1-0 down and do the stuff you want to do. We created but did not protect ourselves properly so each ball we lost was a massive counter-attack.

“That is why we conceded and three goals were deflected. It’s unlucky but it is not a coincidence because it means it was not a proper block. There is nobody to blame apart from me and us.”