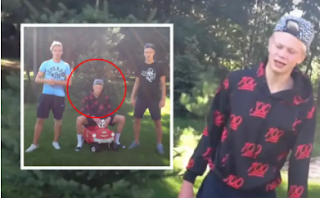 Before he became one of the most exciting prospects in world football, Borussia Dortmund striker Erling Haaland was dropping bars on YouTube under the name ‘FlowKingz’.

That’s right. The Norweigian forward can be seen rapping the single “Kygo jo” via his official YouTube channel alongside two of his friends in a quite frankly bizarre music video.

With almost four million views at the time of writing, we can officially say that Haaland’s lyrical presence isn’t exactly genius but it’s certainly memorable.

What have i just watched, seriously?

Someone has even made a YouTube video translating the song from Norwegian to English, so if you want to know what Haaland is saying on that sunny day in 2016, then please yourself.

Haaland is a man of many talents. He is also a world record holder for the longest standing long jump for 5-year-old’s.

Following his heroics against Paris Saint-Germain in the Champions League in 2019, Twitter user @AndreOstgaard uncovered the remarkable stat surrounding his athletics career.

As a youngster, Haaland’s father Alf-Inge, used to “test” Erling by taking him to play a range of sports, including cross-country skiing, handball and athletics.

And it was the latter where the youngster excelled.

In fact, he recorded the world record for the longest standing long jump for a 5-year-old on January 22nd, 2006, where he jumped 1.63 metres.

Alfe-Inge Haaland explained his decision to “test” Erling in an interview with Dagbladet. “It was before he started playing football,” he said.

“We used to take him to athletics so he could test himself. Erling played handball, athletics and cross-country skiing til he turned 14. Norway’s handball manager wanted him to play handball.”

That’s right. Icelandic coach Thorir Hergeirsson wanted Erling to play handball instead of football but of course, football was his destiny.

“I thought it was nice to play tennis and handball next door.” Alfie said when talking about his son’s love of sports at an early age.

“Versatility is important. You get to develop completely different sides of the body, and that can be positive no matter what you do.”

Breaking: Kagara School Boys and Their Teachers Have Been Released

Chelsea vs Man Utd: I Was in a Dark Place After Losing to Solskjaer – Tuchel