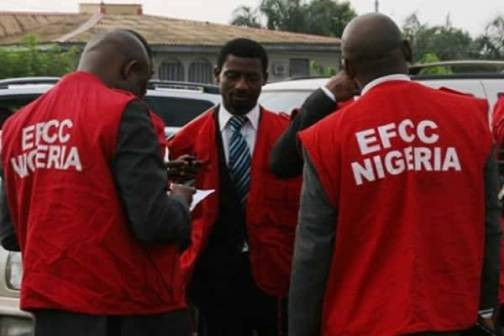 The Economic and Financial Crimes Commission, EFCC, Uyo Zonal Office has secured 16 convictions in the first quarter of the year 2019, and recovered the total sum of N69,431,029 and $9,630.

A statement from the antigraft agency says the Deputy Zonal Head, Alex Ebbah, made the disclosure today May 3rd. He said three units of three bedroom flats situated at Oghara, Delta State, were also recovered after the Court ordered their final forfeiture, including one Lexus E350 saloon car.

Among other property forfeited include, two truck-load of 33,000litres of AGO each; 25litres of AGO in 27 cellophane bags; nine HP laptops, one MacBook Air laptop; one Dell laptop and one Acer laptop; one Samsung Galaxy S9 Plus and iPhone X.

Highlighting the success made so far in the Zone, which marks its two years of establishment, Ebbah noted that “113 petitions were received from individuals, organizations and government agencies”, from which the convictions were secured, while other cases are undergoing prosecution in various Federal and State High Courts.

Ebbah said: “Recall that the office was opened in mid-2017 by the Acting EFCC Chairman, Ibrahim Magu, with an effort to reduce the level of economic and financial crimes around the Niger-Delta region, mostly Akwa Ibom and Cross-Rivers State.

“The Office has so far made significant progress with regards to fighting corruption around the region and is still on its stand to see that the level of corruption is reduced to the barest minimum in the Zone”, Ebbah said.

Sarri Under Fire for Dropping Hazard against Frankfurt

I Love What Luis Suarez did Against Liverpool – Mourinho

Tacha Replies Ubi, Says She Is On A Whole New Level Now (Photo)

Most talked about BBNaija housemate, Tacha has replied Ubi Franklin by explaining that she is on a whole new level…

Who Jah Bless, No Man Can Curse – Okon Lagos Fights For Funke Akindele

Another Coronavirus Patient Discharged In Lagos