Home > Entertainment > Eddie Murphy thinks if Michael Jackson and Whitney had not made their life all about showbiz, they had probably still be alive 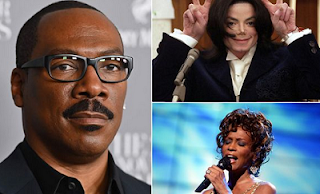 Eddie Murphy has opened up about why he quit Hollywood and he wishes he had persuaded late greats Whitney Houston, Prince and Michael Jackson to have done the same.

Eddie recently returned to stand-up comedy with an appearance on Saturday Night Live but before that, he had given himself a self-imposed ban from Tinseltown.

Speaking to Vanity Fair, the 58-year-old revealed how he decided to take a break in 2012 and how he had wished his “contemporaries” had done the same.

Eddie revealed: “Maybe about eight years ago, I said it’s time to take a break and not really be pushing at movies like I used to.

Eddie continued to say that there is more to life than work: “My career, or what I am as an artist, that’s not at the centre of my life.

“At the centre of my life is my family and my kids. That’s the principal relationship, and everything comes after that.

“I have 10 kids, and I’m present, and I’m part of their lives. You got to have some kind of balance with career and personal life.”

Eddie first auditioned to appear on SNL when he was 18 and started making films when he was 20, giving him over four decades in the industry.

He said that he needed time out to “just be Dad.”

Speaking about the passing of the likes of Jackson, Prince and Whitney, Eddie said: “So many of my contemporaries are dead, like the people that came on the scene when I came on the scene in the ’80s,” he told the publication.

“The people that I knew around my age – that had an impact in their areas – they’re mostly… they’re gone. Michael… and Prince… and Whitney, those are my contemporaries. And they’re gone.”

Eddie went on to explain how their careers as artists became “all-consuming”.

He continued: “The centre of their whole s***, their life revolved around them as artists. Everything else suffered as a result of that. Your personal relationships, and your finances, and all that stuff. Substance abuse problems.

“All that stuff [happens] because show business can’t be what’s at the centre. Especially if you get to reach these highest levels, and you’re Michael Jackson or you’re Prince, or you’re Elvis.

“If you’re sitting on that, and show business is everything, that’s the recipe for an early exit.”

¨I’m tired of being picked on!¨ Songbird, Avril responds to Naiboi’s backlash

Mercy Johnson And Hubby Step Out in Matching Outfits