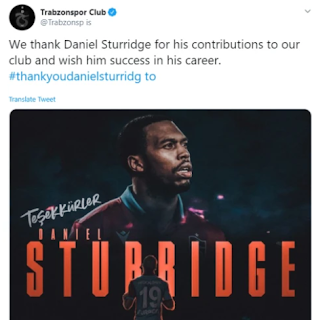 It’s been a wild few months for Daniel Sturridge. The former Liverpool man opted to take himself to Trabzonspor last summer, but agreed to terminate his contract on Monday. Now, he appears set to link up with David Beckham in Inter Miami.

Sturridge managed 16 appearances for the Turkish side this season, racking up seven goals and four assists in all competitions, but he still decided to terminate his contract and take his talents elsewhere.

Now a free agent, the Studgemeister General is only eligible to join a new team whose transfer window is still open. According to Turkish journalist ​Haluk Ayyıldız, that team is set to be Inter Miami.

Beckham’s side began their ​Major League Soccer journey on Sunday, but they fell to Los Angeles FC and the brilliance that is Carlos Vela.

A high-profile addition could be exactly what Inter Miami need, while Sturridge could relish the chance to reinvent his career in MLS.

Beckham had previously been tipped to move for the likes of Luis Suárez, Edinson Cavani, ​Cristiano Ronaldo and ​Lionel Messi, but maybe Sturridge isn’t an awful alternative? Maybe? They’re basically the same?

We’ve already seen what playing in the league can do for established names like Zlatan Ibrahimović, who proved himself once more during his spell with LA Galaxy and earned a return to ​AC Milan in January.

Could the same happen for Sturridge? His situation is not too dissimilar from Ibrahimović who, when he arrived at LA Galaxy, was seen as an injury-prone forward who would struggle at the top level.

The Swede proved everyone wrong, and Sturridge will hope to do the same. Ever since the 2013/14 campaign, injuries and inconsistency have plagued the Englishman’s career, so he will be desperate to show his doubters that he can still hang.

At just 30 years old, it’s not like Sturridge is particularly close to retirement. If all goes well, he could still have a few years left in his tank.