Cassper Nyovest has ‘written off’ plans to reconcile with AKA

It looks as if rapper Cassper Nyovest is nowhere close to reconciling with AKA, especially after the Supa Mega’s recent Twitter rant.

AKA straight up disrespected Cassper’s parents on the social media platform last week, while trying to push his rival to sign a contract for a “boxing match”.

The Supa Mega later apologised for his comments and many fans hoped the rappers would forge a partnership and become great friends.

But Mufasa felt AKA’s insults were too much to forgive and rubbished any suggestions of reconciliation with the rapper.

He told a fan he’d drawn the line and “written off” AKA after his rant.

“My mom and dad? NEVER BRO! The line was drawn yesterday! Thank God they both raised me well and I can think before I act mara da bra ke right off. Let’s rather focus on how we fight Covid-19 for now. Second half!”

Cass broke his silence on Thursday afternoon, tweeting that he was disgusted by the insult.

“Someone swears at my parents and it’s ‘AKA and Cassper are boring’. I’m not innocent at all in this thing, but I have never disrespected anybody’s parents or family, so miss me with that because I just wasn’t raised as if that.”

The rapper added that “there’s a line that you don’t cross! Even with enemies!”. 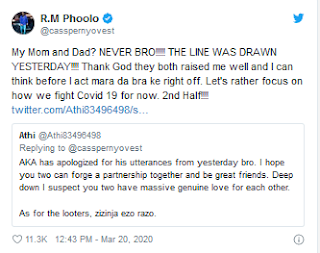