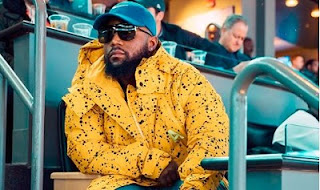 Rapper Cassper Nyovest is the talk of America after being praised on popular US radio show, The Breakfast Club.

Cassper was given a young shoutout by Swizz Beatz during an interview with the show’s Charlamagne tha God on Wednesday. The pair took turns gushing over his excellent performance at the 2018 Global Citizen Festival.

Cassper said he was honoured to be mentioned on such shows and believes he is being used as “a vessel to change so many lives and inspire the world”.

“God has used me as a vessel to change so many lives and inspire the world. I pray that he keeps using me. It gives me such a sense of pride to know I have been useful to his kingdom and to the world. Bless up.”

This is not the first time that the rapper has received a great review for his work and impact on the rap culture. The rapper left another radio star, Sway Calloway, impressed in 2016 when he made an appearance on his morning show.

Cassper had impressed global audiences with his music and preached to Nigerian MTV VJ, Ehizojie the gospel of Amapiano.

The Move For Me hitmaker explained that it was the biggest sound in SA right now and said he was keen to take the sound to Nigeria.

“That’s what the people want to hear! It killed everything! I love it! Just purely authentic South African music! I’ll put you on so we introduce it to Naija,” Cassper expressed.

Although he is a hip-hop head at heart, Cassper assured his fans that he wasn’t leaving the genre but was taking a break from a bit.

“Don’t get it twisted, I still love hip hop music. I just hate “politics”. I needed the break. I will be back one day. With a Bang!” 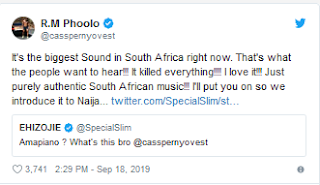 Shout out to .@THEREALSWIZZZ and Charlamagne for the mention on the breakfastclub yesterday. LOVE! AFRICA TIME!!! pic.twitter.com/YvM9gIhHfH