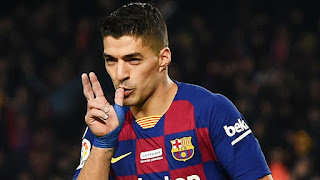 With other injuries mounting, the Uruguay international could yet return to action before the season comes to an end.

Luis Suarez could hand Barcelona a major boost as the Uruguay star may return from injury ahead of schedule.

Suarez is currently dealing with a right knee injury and recently underwent surgery for the issue.

The injury, suffered in the Blaugrana’s 3-2 Supercopa de Espana semi-final loss to Atletico Madrid, saw Suarez reaggravate an old issue that kept him out of the Copa del Rey final against Valencia last season.

Prior to the injury, Suarez featured in 23 games this season, in which he had scored 14 goals for the club.

Following the surgery, Suarez was expected to be out of action for the rest of the season, but it appears that he may be back in time for vital matches ahead.

Sources have told us that the former Liverpool star is recovering well from his injury and is now off crutches.

Suarez is already walking normally and has passed a medical review with positive results, giving the club hope that he could return before the season ends.

In fact, the forward believes that he could be back in time for the semi-finals of the Champions League in in late April if Barcelona were to advance that far in the competition.

That timeline would also see Suarez fit in time to feature in Barca’s last four league games, which could be vital in La Liga’s title race.

As things stand, Barcelona sit three points behind Real Madrid and, if Suarez were to be fit for those final four matches, the Catalan club would have him available for clashes with Espanyol, Real Vallodolid, Osasuna and Alaves.

Up first, though, Barcelona need to navigate the road to Suarez’s potential return, which includes upcoming matches against Getafe and Eibar before returning to the Champions League.

Barca are set to face Napoli in their last-16 tie, with the Spanish side visiting their Italian opposition for the first leg on February 25.

Quique Setien is currently facing an injury crisis up front, with Ousmane Dembele being ruled out for the rest of the season on Tuesday due to a hamstring injury.

However, Dembele’s injury could pave the way for an addition, as Barcelona will be allowed to make an emergency signing outside of the transfer window due to fitness problems.

The Spanish FA (RFEF) rules state that teams may sign a new player from another Spanish club if they have a player ruled out for five months or more.

Barcelona have been linked with moves for Willian Jose from Real Sociedad and Getafe’s Angel Rodriguez.

CNN Correspondent, Omar Jimenez Arrested On Live V As He Gives A Report

CNN Correspondent, Omar Jimenez Arrested On Live V As He Gives A Report

Lady Slaps Her Husband, Pours Soup On Him For Going Out With Side Chick (Video)

Trump announces probe of Chinese companies listed in US

African leaders back Adesina, say no nation has veto power over AfDB

Blood Samples Of Coronavirus Patients Snatched By Monkeys In India