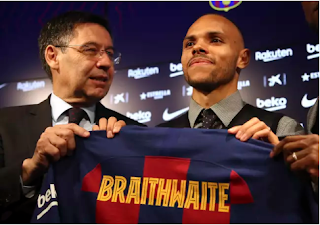 The Danish international completed a controversial £16 million move from Leganes yesterday and was officially presented at the Nou Camp.

In an empty stadium, the 28-year-old attempted to show off why Barca signed him but failed to do so.

The former Middlesbrough man flicks the ball off his head to the ground and begins to dribble with it.

He then attempts a ‘rainbow flick’ but completely messes up the execution.

It’s not the best of starts to Braithwaite’s Barcelona career and his press conference didn’t go to plan either.

Many of the Spanish press seemed disinterested in asking him questions and instead direction questions to club president Josep Bartomeu.

The Dane has been signed on an emergency deal following long-term injury to Ousmane Dembele.

He expressed his delight at joining the Catalan giants during his unveiling on Thursday.

“At first I was surprised by Barca’s interest, but for many years it was something that I had dreamed of,” he explained.

“I had the ambition to play at that level. I always believed in it. If you are positive, you work hard and you pray, everything is possible.”

Leganes are furious with the handling of the transfer as they struggle near the foot of La Liga.

Braithwaite had scored six of their 18 goals this season and the Madrid outfit cannot replace him.

We consider that there is a regulation that is unfair, from which Barcelona has benefited,’ Leganes CEO Martin Ortega said per Daily Mail.

“The one who is damaged by this is Leganes. We want to raise our voice. The damage is enormous.

“We do not understand the current regulation in any way. That a team, because a long-term player is injured, may unilaterally, transfer that problem 100 percent to Leganes.

“Barcelona knows the damage it can do with the signing of Braithwaite. We believe that there is a regulation that is not fair. FC Barcelona has benefited from that regulation. The injured party is Leganes.”

Braithwaite showing off his skills that made him such a huge sucess at Middlesbrough 😂🔥 pic.twitter.com/C4bgZeseST