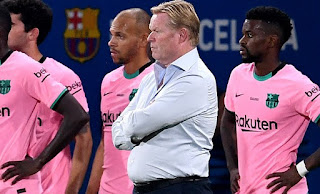 Messi has voiced his outrage over the way Luis Suarez has been treated by Barca this summer.

Koeman said: “I think it’s normal that a player is a little sad when a friend of his leaves the club after so many years together. It’s part of football.

“But the most important thing for me is how Leo’s been in training and games. In training, he’s been an example for everyone. I have not seen a day when he’s seemed affected. He returned after a day off really motivated.

“He has shown it in training and he will show it in games. There are no doubts about Leo in that sense.”

Suarez signed for Atletico Madrid on Friday and could make his debut for Diego Simeone’s side against Granada on Sunday.