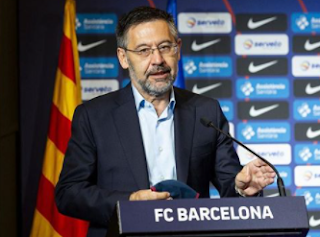 Outgoing Barcelona president Josep Bartomeu has confirmed the club have “agreed terms” to join a European Super League in the future.

Bartomeu announced his resignation on Tuesday evening after six years at the helm of the Catalan giants.

But in his final press conference as a member of staff, he dropped the huge news that the club would be involved in a potential super league in the future.

The 57-year-old stated per barcacentre: “I can announce extraordinary news… Yesterday we accepted the requirement to participate in a future European Super League that will guarantee the economic sustainability of the club. Today we have accepted the new format of the Club World Cup.”

News emerged earlier this month that Premier League duo Manchester United and Liverpool were prepared to get involved in a ‘European Premier League.’

Bartomeu didn’t confirm if this was the same league Barcelona had committed too, but he stressed it was for their financial benefit.

He has stepped down from his position rather than await a fans’ vote of confidence on his future at the club.

The board of directors have also resigned and an election will be scheduled to appoint a new president.

A temporary board will act until elections take place.

Speaking at a press conference on Tuesday, he said: “I am communicating my resignation from my position of president, along with my entire board of directors.

“This is a thought out and relaxed decision, agreed with all my fellow directors.”

Despite winning a number of trophies under his presidency, Barcelona fans and players alike had grown disgruntled at their direction with Bartomeu.

Club legend Lionel Messi nearly left in the summer and gave a tell-all interview, in which he heavily criticised the hierarchy.

Barcelona are currently 12th in La Liga and lost 3-1 to bitter rivals Real Madrid in their last game.

They return to action on Wednesday evening when they will face Juventus in the Champions League.