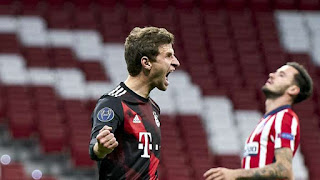 Atletico Madrid’s hopes of qualifying from their Champions League group will go down to the final matchday after Thomas Muller scored an 86th-minute penalty to earn a weakened Bayern Munich a 1-1 draw at the Wanda Metropolitano.

Bayern had won their previous 15 games in UEFA’s flagship competition but were already assured of top spot in Group A and left the likes of Robert Lewandowski and Manuel Neuer out of their travelling squad.

With Lokomotiv Moscow losing 3-1 at home to Salzburg earlier on Tuesday, victory for Atleti would make certain of second place with a game to spare, an aim they were on course to achieve thanks to Joao Felix’s eighth goal in 14 appearances this season.