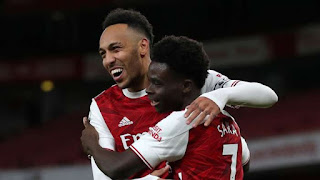 The Gabon international has enjoyed great fortune against the Magpies, and that run continued on Monday evening at the Emirates Stadium

Pierre Emerick-Aubameyang continued with his impressive goalscoring run against Newcastle United thanks to his double in Arsenal’s 3-0 triumph on Monday evening at the Emirates Stadium.

The Gunners’ skipper has either scored (five) or assisted (two) in six of his seven games against the Magpies in all competitions, finding the net in each of his last four outings against the St James’ Park giants.