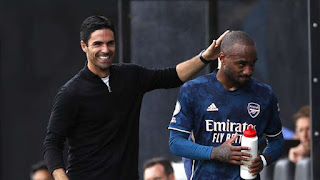 Lacazette is contracted at the Premier League club until 2022 after joining from Lyon 2017, but there has been speculation over the forward’s future.

The Frenchman scored his 50th goal for Arsenal during Saturday’s 2-1 win over West Ham at Emirates Stadium.