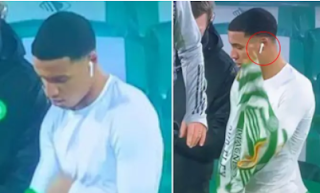 Celtic youngster Armstrong Oko-Flex nearly made his professional debut for the club with AirPods in his ears.

The Hoops were taking on Hibernian on Monday evening and wanted to inject something fresh up front.

Oko-Flex was called from the bench and was ready to make his Scottish Premiership debut.

But the 18-year-old still had his AirPods in while putting his shirt on and he was seconds away from taking to the pitch with them still in.

It’s likely he was using them to communicate with members of the Celtic coaching staff who weren’t in attendance at the game.

Regardless of the reason, fans were still in shock at seeing Oko-Flex rocking wireless earphones on the bench.

Coach Gavin Strachan did confirm following the game it was manager Lennon on the other side of the AirPods.

When asked by Sky Sports per Daily Record, he said: “Yes (it was the manager speaking to him).

“He was just getting some messages to him before he came on the pitch.

“Everyone uses every bit of technology available to them. We used it, it’s good for a young player to hear the manager’s voice before he goes on the pitch.”

Celtic drew the game 1-1 and it means they are a whopping 21 points behind Rangers in first place.

David Turnbull thought he’d sealed all three points in the 81st minute, but Kevin Nisbet struck late on for Hibs.