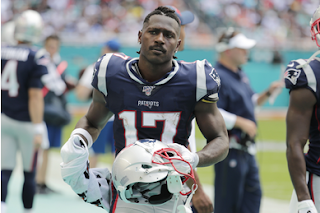 NFL star Antonio Brown has been hit with another allegation of sexual misconduct.

An artist who was hired to paint a mural in his home has alleged that the wide receiver had sex with another woman in front of her while she worked.

The artist, whose identity is yet to be revealed was previously featured in a Sports Illustrated article about Brown. She claimed the NFL star got naked and hit on her while she was working at his home in 2017.

According to her, she declined his advances and felt he was being completely inappropriate.

After she went public, Brown allegedly sent her a series of menacing text messages as part of a group chat, instructing associates to look into her personal life.

In the chat, Brown included a photo of the artist’s children, which she took as a clear threat.

The artist’s attorney, Lisa J. Banks, sent a letter to the NFL saying her client is “understandably frightened by these text messages, which are clearly intended to threaten and intimidate her.”

“What is not detailed in the story is that Mr. Brown engaged in other forms of sexual misconduct during the two days that she worked in his home, which included Mr. Brown having sex with another woman while the artist was working in the same room.”

Antonio Brown, who was recently signed by New England Patriots’ and has been fired and dropped by several brands amidst his sexual accusations. 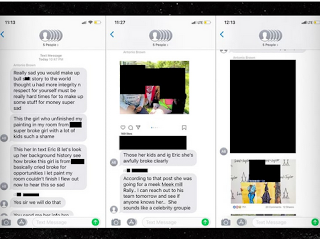 Nigeria Woman Testifies As Her Genotype Changed To ‘AA’