Ghana emphasised that they are a formidable force at home in 2020 Tokyo Olympic Games football qualifying by trouncing Gabon 4-0 in a second round first leg Saturday. 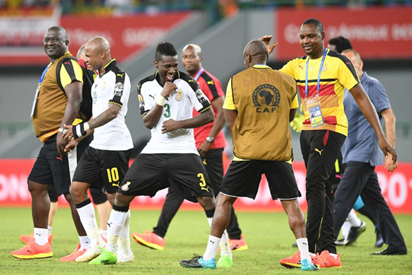 Ghana’s forward Asamoah Gyan (C) celebrates with team staff at the end of the 2017 Africa Cup of Nations group D football match between Ghana and Mali in Port-Gentil on January 21, 2017. / AFP PHOTO

Owusu managed only one against the Gabonese at the Accra Sports Stadium, opening the scoring after 15 minutes with the lone first-half goal.

Benjamin Tetteh doubled the lead in the first minute of the second half and two late goals from Osman Bukari completed the rout.

The teams meet again on Tuesday in Libreville and is difficult to imagine six-time Olympics qualifiers Ghana squandering such a commanding aggregate advantage.

Algeria, who competed at the 2016 Rio de Janeiro Olympics, also look set to reach the third round after forcing a 0-0 first-leg draw away to Equatorial Guinea in Malabo.

The 13 second legs are scheduled for Sunday, Monday and Tuesday with much interest centred on Nigeria, who have home advantage as they attempt to overcome a 2-0 deficit against Libya.

Nigeria have been the most successful African nation at Olympic football tournaments, winning gold in 1996, silver in 2008 and bronze in 2016.