A 2nd lady has bravely stepped forward to accuse DBanj of inappropriate sexual behaviour towards her.

Dbanj is still dealing with his first rape allegation which has now become a police issue and now has a 2nd one to contend with.

A lady took to Twitter amidst the bashing of DBanj and also dropped her story.

According to her, she once worked a music shoot with DBanj and he inappropriately groped her.

“I worked with this nigga before and he definitely made me feel uncomfortable on set,” Twitter user @Darkskindchk tweeted.

“Literally tried to grope my body up ! I was like wtf . This was when everyone was just chilling waiting on the director during a music video.” she added.

Whilst not a rape allegation it’s another allegation of sexual assault and DBanj better hope others don’t step up to tell more stories.

As we’ve seen with #MeToo, when the allegations start dropping in numbers then it’s game over.

In the coming days, we are sure two of the finest Nigerian celebrities Chika Ike and Regina Daniels would start shot a throwing at each other over Ned Nwoko the billionaire husband of Regina.

Readers would recall that some few days ago, the mother of Regina Daniels threatened to deal with Chika Ike if she doesn’t stop throwing herself about on her son in law.

According to her, she will take her to the spiritual way if she continues to hang around him because she has heard rumours that the two have been hanging around most of the time.

Well, seems Chika Ike is in for trouble as a social media user has sent a video to Regina Daniel alleging that she has seen the actress and Ned Nwoko having a nice time together.

The user took to the comment section to tell Regina Daniel to check her DM for the video and get back to her or she would post the video on social media in the next 2 hours.

She posted: “Girl I just send a video on dm. I saw Ned Nwoko and Chika Ile @ Maitama and I recorded it. I will upload it on my page in two hours ur you don’t get back to me”

Chika Ike has been rumoured in the past to be in a serious relationship with the husband of Regina Daniel long before he even expressed interest in Regina.

Some people have also stated that Regina’s mother had also in the past dated Ned Nwoko and used her connections to make her daughter marry the billionaire and politician. 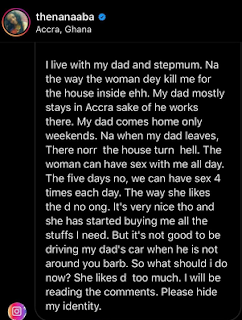 Guardian News reports that Faith alleged that her estranged husband, raped her maid who is a minor and also molested his baby by putting his manhood in the baby’s mouth.

Reports indicate that the legal counsel to the wife, Bamidele Ogundele, reported the case to the Domestic and Sexual Violence Response Team (DSVRT) at Alausa, Ikeja and Temidayo was invited, but he didn’t show up.

According to DSVRT Coordinator, Tolulope Rodes-Vivour Adeniyi, he promised to come on the appointed date, July 27, 2020, but didn’t show up.

Temidayo through his counsel, Ebinmi Beredugo, filed a fundamental rights suit dated July 3, 2020 before the Lagos High Court. With the suit, he wants the court to stop the police from arresting him.

Recall that the couple’s wedding in 2019, was the talk of the town as social media went agog and celebrities like Alexx Ekubo, Angela Okorie amongst others graced the occasion.