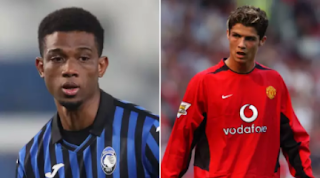 Rio Ferdinand has branded Amad Diallo as a potential “world-beater” and likened his transfer to that of Cristiano Ronaldo when he signed for Manchester United.

The Red Devils announced the signing of Diallo, 18, from Atalanta after striking a deal before the transfer window closed in October.

The 18-year-old joins the Old Trafford club in a move worth up to £37.2 million.

And former United defender Ferdinand believes Diallo’s transfer bares resemblance to Ronaldo’s switch to the club from Sporting CP back in 2003.

Speaking on FIVE YouTube channel, he said: “We’ve just bought a kid in from Atalanta and hopefully he does something.

“If you see his clips and speak to people at the club who are involved in buying him, potentially this kid could be a world-beater.

“That is the thought of Manchester United people that this kid is one they have unearthed.”

Ferdinand continued: “I don’t want to put the pressure of Cristiano Ronaldo on him, but no-one knew about Ronaldo when we bought him other than the people in Portugal.

“This kid seems similar in that sense and if you see his clips and the way people talk about him, the world is his oyster if he applies himself right.”

Diallo is somewhat of an unknown quality having only made a handful of appearances for Atalanta.

But the early comparisons to Ronaldo shows the potential of the Ivorian and how highly thought of he is at United.

The youngster is available for selection ahead of the second half of the 2020/21 season.