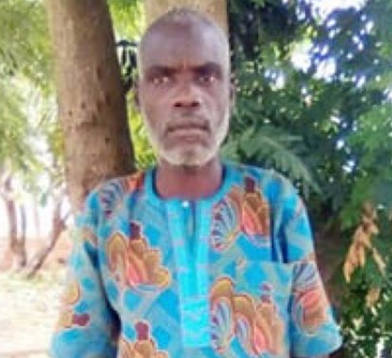 52-year-old Denni Agya Kiyeye, pictured above, has been arrested by operatives of the Nigeria Security and Civil Defence Corps (NSCDC) for impregnating and attempting to murder his 15-year-old niece at their home in Ilupeju village in Gbonyin Local Government area of Ekiti state.

Parading the suspect before newsmen, the NSCDC Commandant, Solomon Iyamu, said the victim lived with the suspect after her mother passed away in Benue state in 2013. Sadly, he began taking advantage of her and got her pregnant in 2016 and was able to carry abort an abortion on her by a quack midwife.

When interrogated, Kiyeye claimed the pregnancy was jointly owned by him and one Kunle, who happened to be the girl’s school mate in the village. He added that the girl later became pregnant for him again, forcing him to conspire to terminate her life in a nearby bush around the village to cover up for his shameful act. She was however rescued by a resident of the village who caught and reported to the head of the village.

Tamar Braxton To Celebrate Her 42nd Birthday In Nigeria

Man Rearrested After Escaping From Prison

Why We Attacked Anti-Okorocha Protesters In Owerri – Police

There was a fire incident at the premises of Ikeja Airport Hotel in Lagos on Thursday night. Three vehicles were…

A Senior Advocate of Nigeria, Mr Ebun-Olu Adegboruwa, has appealed to the Governor of Lagos State, Mr Babajide Sanwoolu, to…