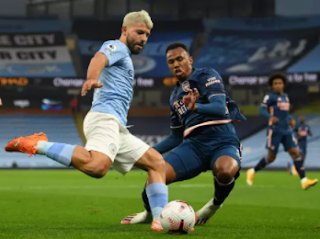 The Argentine ace was making his return after a lengthy injury lay-off and played just over an hour in the 1-0 win at the Etihad Stadium.

He was rather quiet and that was largely because of the performance of Gabriel, signed from Lille in the summer for a reported £27 million fee.

The Brazilian was extremely impressive defensively and not afraid to try a unique approach against Aguero. In the early stages of the game, Gabriel was seen running on his knees as he looked to thwart City’s record goalscorer.

Aguero was fed wide by Bernardo Silva and after looking like he had got past the center-back, Gabriel recovered superbly with some matrix style-defending. He then made the block and conceded a corner as Aguero tried to pick out a teammate.

It was just one of many commanding moments for Arsenal’s No.6, who has already settled into their backline with ease and won the club’s Player of the Month award for September.

Gunners fans are very much enjoying the displays he’s been churning out so far, with plenty of big statements being thrown around regarding how good he is.