where can you buy viagra on the street in san francisco? viagra can buy over counter buy fake viagra buy cialis in australia online best pharmacy to buy viagra
Home Tags Posts tagged with "Ripe"
Tag:

Lagos Is Ripe For Takeover By PDP – Fayose

A former governor of Ekiti State, Ayodele Fayose, has said that Lagos State is ripe for the Peoples Democratic Party to take over in subsequent elections.

Fayose was quoted by his media aide, Lere Olayinka, as saying, “Lagos is ripe for the PDP to take and we will take the state if we work hard and put our house in order.”

This was contained in a statement titled, “Lagos PDP must retire Bode George to make progress, urges support for BOG to win senatorial bye-election – Fayose,” in Ado Ekiti on Wednesday.

Olayinka said his principal said this during the inauguration of the PDP Campaign Committee for the Lagos East Senatorial bye-election.

Fayose was quoted as saying, “This senate election is for the PDP to take if we are ready to take it. You have done it before by producing House of Representatives members and you can do it again by producing a senator.

“Before PDP can win any election in this Lagos, the party must first separate wheat from the chaff.

“It is high time Bode George is told to go and retire. Let him be a support stand for the younger ones in the party.

“As an elder, Bode George is supposed to stay at home and be giving blessing to his children aspiring to grow, not to be contending positions with them.”

Lagos mourns death of Justice Oluwa, says he was a ‘rare bred Lagosian’

Lagos State Government has said that late Justice Isiaka Ishola Oluwa (Retd) would be remembered for his meritorious service and contribution to the growth of the state.

According to a letter of condolence by Attorney General and Commissioner for Justice, Lagos State, Moyosore Onigbanjo, SAN, the deceased was an erudite and a rare bred “Lagosian.”

The letter read, “On behalf of the Lagos State Ministry of Justice, I wish to commiserate with the entire OLUWA family on the transition of our beloved Hon. Justice Isiaka Ishola Oluwa Retd at a ripe old age of 102 years on Saturday, 9th May 2020.

“The news of the demise of our revered Judicial icon, Justice Oluwa is a mixture of sadness and happiness. Happiness; because his transition is a celebration of an impactful life, well-lived and sadness, because we will miss his fatherly presence and wisdom at this time.

“Justice Oluwa, was an erudite, rare bred Lagosian who spent his time in retirement canvassing and championing the cause and interest of Lagosians in every sphere of endeavour.

“I know him to be outspoken about the political relevance of Lagosians in all matters of appointments relevant to the management of the State.

“The meritorious service and contribution of our revered Justice Oluwa to the growth and development of the administration of Justice in Lagos State during his active career years on the bench, as a renowned Justice of the State High Court till his retirement in 1983 will always be remembered.

“Justice Oluwa will be sorely missed by all, especially, members of the Judiciary and Ministry of Justice Family.

“While we pray for the repose of the Soul of our departed Justice Oluwa, may the Almighty Allah grant the family the strength to bear the pain of this irreparable loss.”

“Ripe For Marriage?” – Reactions Pour In As Ben-Murray Bruce Shares Photo With Daughter

Sir, I appreciate the fact she’s pretty, I have a good future, I will like to date your daughter.

She’s beautiful, I mean she has to be anyways.

A father’s love for her daughter. Love, so great.

Can i be your in-law

Cute. God will continue to comfort you Sir. Is now the right time to bless me Sir?

I can see you guys are trying to make a common sense..

God Keep you all Safe and Strong after the demise of Her Mum and Your Lovely Wife… Thank You for All you have been to Them and Us… Boss?

Hmmm she is beautiful no doubt but did the beauty match her character n attitude that’s all..

Before they start blaming trump go and sit at home with immediate effect .

Beautiful but I’d never understand the idea behind ladies and their “free-kick” pose.

Sir can you be a little bit generous to your boy here, will surely appreciate sir… STAY SAFE and healthy sir

Edochie also shared a lovely photo of him and his beautiful daughter.

As expected fans and followers took to the entertainer’s comment section to celebrate his daughter. Many people prayed for her and wished her well.

Meanwhile, some young men replied to the actor’s post and made various comments about his daughter’s body, noting that she was ripe enough Disgusted by the men’s actions, @Blaise_21 made a screenshot of the men’s photos and their comments.

She shared the photos and comments on her page while describing them as abusers. 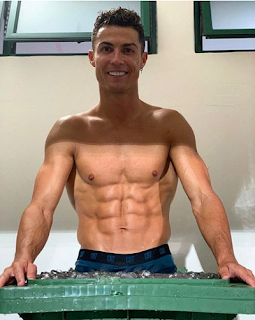 Ever wondered just how Cristiano Ronaldo continues to be a physical freak of nature despite his 35th birthday approaching in February?

Wonder no more, as Joaquín Maroto from AS has all the information as to what the five-time Ballon d’Or winner does on a daily basis to stay on top of his game.

Ronaldo allocates time for training, rest and relaxation every day and it’s common knowledge that his exercise is not merely restricted to sessions with Juventus and Portugal.

CR7 has his own programme that comprises of five gym sessions a week, with pilates and swimming also part of his regime.

And these are anything but warm down sessions for the former Real Madrid and Manchester United star, as often his personal trainers have to step in and stop him overtraining such is his dedication and desire to be the best.

Back when he was a young kid making waves at Sporting CP, first-teamers had to warn him about beasting himself too much.

“I would also give him lifts [to and from training]. But I’d have to wait an hour at the training ground, because he never wanted to leave.

Furthermore, Ronaldo’s diet sees him have six different meals per day – typically pasta and chicken for his protein and carbohydrate fix – and none of them are ever cooked with salt.

Cheat meals are a rarity for Ronaldo but eating pizza with his son is his guilty pleasure, as he revealed in an interview with YouTuber ChrisMD.

“The key is to take care of your body, train, do your recovery and eat properly,” Ronaldo said.

“Although sometimes I do eat pizza with my son otherwise it would be boring.”

Ronaldo will allow himself to have orange or pineapple juice at breakfast in the morning but other than he only drinks water, while he places a great focus on getting eight hours sleep every night. What’s more, he always has a siesta – a short nap in the afternoon – after his fourth meal of the day.

When Ronaldo signed for Juventus, his medicals showed that his physical condition was that of a 20-year old. He has 7% body fat.- the average being around 10 or 11% – and he also had a staggering 50% muscle mass.

The man himself has even talked about playing into his 40’s in the past and given he’s still clocking 33.12km/h inside 10 seconds, as well as continuing to bag a hatful of goals, it’s genuinely not out of the realms of possibility. 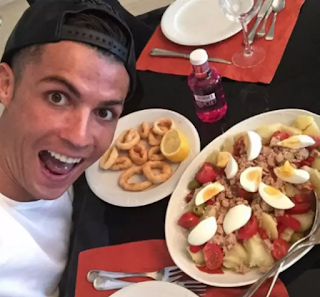 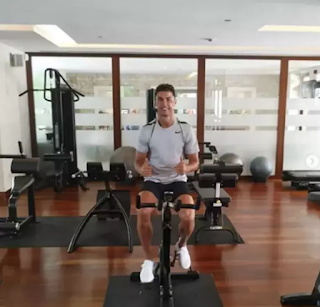