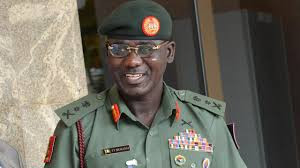 The Chief of Army Staff, Lt.Gen. Tukur Buratai, says contrary to the belief of many, he and other service chiefs have not disappointed President Buhari and the nation in the discharge of their responsibilities, since their appointment by the President in 2015.

Buratai said this in a meeting with the Chief of Defence Staff, General Gabriel Olonisakin, at the Nigerian Army Super camp four located in Faskari, Katsina State. In his words

“Exactly five years ago, I was in Ndjamena, Chad Republic, when I heard the announcement of General Olanisakin as the Chief of Defence Staff as well as my own appointment as Chief of Army Staff.

There have been calls by several Nigerians for the President to sack the service chiefs for failing to tackle the level of insecurity witnessed across the country.