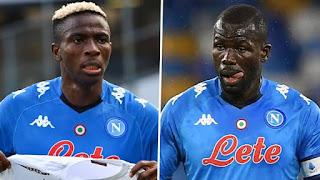 The Nigerian’s seismic impact in the Italian top flight, and presence of the Senegal colossus mean Gli Azzurri could gatecrash the title conversation

Victor Osimhen’s reaction 10 minutes before eventually scoring Napoli’s fourth in their 4-1 drubbing of Atalanta was striking. The effervescent frontman had just been denied by Marco Sportiello in the 33rd minute at the Stadio San Paolo, yet, his wide smile and double high-five with Dries Mertens reflected his overall mood.

For someone who hadn’t been following the game up to that point, you might have thought the Nigerian was on a hat-trick and was amused at being denied his third of the afternoon. Far from it, the 21-year-old wasn’t on the scoresheet at the time, neither had he opened his competitive account for the Partenopei almost halfway into his third appearance since moving from Lille.

In a statistics-driven age, where observers focus on raw numbers, some eyebrows may have been raised before Gennaro Gattuso’s troops faced free-scoring Atalanta on Saturday. Osimhen had fired blanks going into gameweek four — having played 119 minutes before kick-off in Naples — a run that extended to 162 minutes before his 43rd-minute strike to send Gli Azzurri 4-0 up at half time.