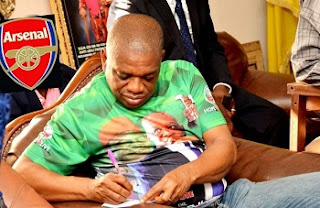 Nigerian billionaire Orji Kalu has announced he plans to buy a significant stake in Arsenal.

Kalu, a senator, businessman, and newspaper owner with an estimated fortune of £760 million has now said he wants to make a major investment in the North London giants to help ‘bring back trophies’.

And it will not be his first foray into the beautiful game.

The 60-year-old, worth $1bn, announced: “Our success with Enyimba FC between 2000-07 has continuously increased my passion for football.

“As the pillar of sports in Africa, I am considering an investment in football and I will buy 35 percent stake in Arsenal FC.

“Our target is to lift the Champions League and EPL, and valuable investment as well.

“Doing what you love and loving it is where greatness lies. I need 35 percent of Arsenal to bring back trophies.”

Kalu’s compatriot Aliko Dangote, Africa’s wealthiest man, has previously declared his ambition to take over Arsenal in its entirety.

US condemns killing of 43 farmers in Borno state

Buhari reacts to Zabarmari massacre, says the Armed Forces have been given the marching order to take the fight to the insurgents

Diego Maradona fell and hit his head before he died and was then left alone ‘without help’ for 3 days, his nurse claims