Ngolo Kante wants to leave Chelsea after problem with lampard.

29 year old world cup winner and Chelsea Ace Ngolo Kante is reportedly Not happy with Boss Frank lampard after a fall out over a wedding invitation before the international break.

As first reported by French publication Le Parisien  claim that Lampard did not allow Kante miss a training session to attend a friend’s wedding before the international break.

The decision did not go down well with Kante, who is currently on international duty with with home country France and the 29-year-old is now looking for a  move away from Chelsea with Real Madrid being the potential target.

Kante’s representatives want to secure a transfer within the next one year according to claims, but the player has three years left on his  deal with Chelsea.

The 29 year old defensive midfielder joined Chelsea from Leicester City after winning the premier league with the foxes and has since then made over hundred appearances for Chelsea playing in the defensive Mid field.

But Daily correspondent Matt law has disbanded the claims in a tweet saying there is no issue between Manager and player. 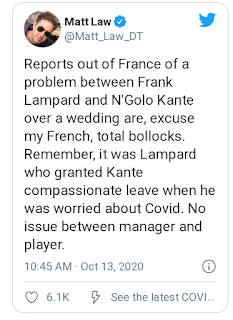