what country can you buy viagra over the counter buy authentic viagra online where can i buy just a few pills online called the female viagra where to buy sum viagra when can i buy generic cialis
Home Sport Don’t Get My Tweet ‘nigeria Is A Jungle’ Twisted, Oshoala Pleads
Sport

Don’t Get My Tweet ‘nigeria Is A Jungle’ Twisted, Oshoala Pleads 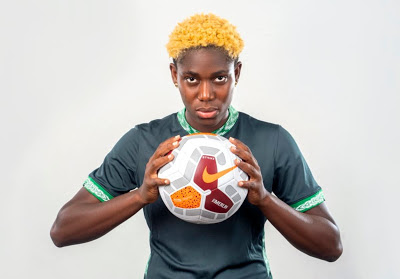 Super Falcons and Barcelona women team striker, Asisat Oshoala, has appealed to Nigerians not to get her tweet, where she labelled the country as a ‘jungle,’ twisted.
Oshoala incurred the wrath of Nigerians following her controversial tweet, ‘Nigeria is a jungle’ on Sunday. But in a series of tweets later, Oshoala suggested her statement was taken out of context, adding, however, she loves Nigeria but is only unhappy with some present developments.

She wrote: “I love Nigeria, Nigeria has given me everything even if it wasn’t in the easiest way. That is why I will also give my all in my own little way… make it easier for the next generation. Na all of us gather love this country but not happy.”

She continues: “I made a tweet on Sunday about Nigeria being a jungle. I did that in relation to the #EndSARS protest and not the country at large.

Oshoala, who was named best player and was the highest goal scorer at the 2014 FIFA U-20 Women’s World Cup, has won the African best footballer of the year award four times.

Super Eagles Are The Second Most Valuable Team In Africa