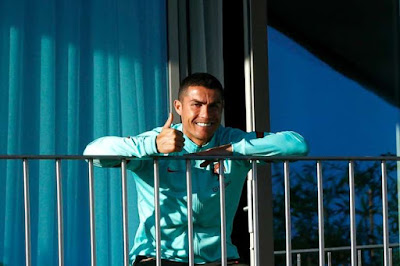 According to journalist Tancredi Palmeri, Cristiano Ronaldo has decided to end his quarantine in Portugal and spend it in Turin. In Italy, the quarantine is 10 days rather than 14. It will allow him to play against Hellas Verona and then Barcelona in the Champions League.

Cristiano Ronaldo was in the news on Tuesday afternoon after it game out that he tested positive for coronavirus. No other teammate has come back positive so the Portuguese FA have just put Ronaldo in quarantine. The others are available for the match with Sweden.

The Juventus footballer stayed in his room at the Cidade do Futebol, on the outskirts of Lisbon. He was spotted watching Portugal’s training session from the balcony. The cameras spotted him smiling while watching his teammates.

The player wants to be back for the Champions League clash with Barcelona. The match will be on 28th October at 21:00 CET in Turin and the footballer will do everything possible to be fit.

As ‘BeIN Sports’ journalist Tancredi Palmeri said, Cristiano Ronaldo has decided to end his quarantine period in Portugual so he can return to Turin and self-isolate there.  At mid-morning, the Portuguese striker boarded a private air ambulance.

The reason is that the quarantine period in Portugal after testing positive for COVID-19 is 14 days while in Italy it is 10. If he tests negative on around 20th October, he will be able to play against Hellas Verona on 25th October.

With regards to the Champions League, the protocol states that a player must test negative at least seven days beforehand. It would make things easier for Ronaldo if he could reduce the quarantine time to 10 days.