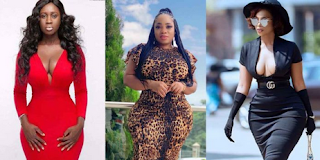 The Slay Queens Association of Ghana is in a state of shock as one of their loyal members, Moesha Boduong has caused yet again another fret on social media with a suicidal post.

Social media users after sighting her post have asked questions as to what is really wrong with the curvy and big booty actress and video vixen.

2 members from the Slay Queen Association of Ghana, Princess Shyngle and Benedicta Gafah very worried have asked their friend not to commit suicide or do anything ‘silly’ to herself.

The concerned pals of Moesha begged her to delete the post as it’s dangerous for her to voice her feelings out on social media. Maybe she wants to seek things out with her backdoor.

See Moesha’s suicidal post below; Princess Shyngle and Benedicta Gafah begs her in the comments section.

We are yet to come to the conclusion of what made her share that suicidal post on social media. Is he depressed? confused? tired of life? Well, whatever it may be we wish her well. Be strong! 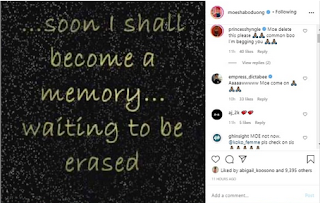 Cynthia Morgan Signs Management Deal With US Based...

Cassper Nyovest gets candid about how self-doubt almost...