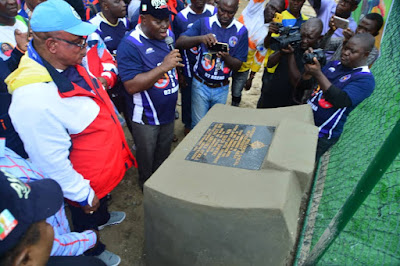 It was an ensemble of the crème de la crème in Ajegunle sporting arena, when the Odion Ighalo 02 Arena and cenotaph were commissioned on Wednesday, October 14, 2020 by Hon. Commissioner for Youths, Sports and Sopcial Development, Hon. Segun Dawodu, who was represented by the Director General of Sports at the Lagos State Ministry.

The event which was carried out to immortalize Ajegunle and former super-Eagles Striker, Odion Jude Ighalo was the first in the history of sporting activities in Ajeromi-Ifelodun Local Government Area.

The commissioned astro-turf standard football pitch in Tolu Nur/Pry School, Tolu complex and cenotaph at Tolu road have been described as the first in the LGA.

According to Hon. Fatai Adekunle Ayoola, the executive chairman of Ajeromi-Ifelodun Local Government Area, the gesture to immortalize Odion Ighalo was to encourage budding talents in Ajegunle to aspire for greatness.

“This decision to name these edifices after Ighalo is to show that our government recognizes and commend those who makes Ajegunle proud at global stage,” he began.

“And with this, we are proud to officially announced Odion Jude Ighalo as Ajegunle Ambassador,” he added.

Former Special Adviser on Rural Development to former Governor of Lagos State, Mr. Raji Fashola {SAN}, Hon. Kalejaiye Adeboye Paul, commended activities of the council chairman. In his words: “These are laudable projects that demonstrate a government that is working and committed towards social and economic development of the local government.”

“This is one of the legacies for a government that is responsive and accountable in Lagos state .
The council chairman held a video call with the Ajegunle born striker. It was reported that the former super-eagles striker promised to develop younger talents in Ajegunle.

The cameo appearance of Surulere Local Government chairman, Hon. Ajide was the morale booster for his football team who squared up with Ifeanyi Udeze led Super-Eagles veterans for a novelty football match to declare the Odion Jude Ighalo 02 Arena opened.

Some of the super-eagles veterans who played the novelty football match included the likes of Godwin Okpara, Ebun Oloyede, Fetuga, Festus Odinni, goalkeeper Akabueze and Yinka, Jonathan Akpoborie, Peter Nieketin and football administrator per-excellence, Don Keffe among others.
Kudos to the ever performing and active chairman of ajeromi ifelodun local government who’s doggedness and commitment to establishing ajegunle as a hub for sporting activities by providing state of the art sporting facilities.

Ajegunle to the world!!!! 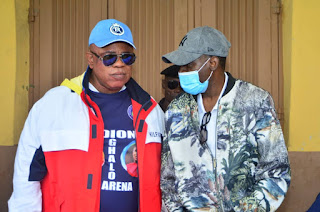 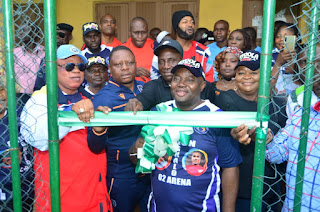 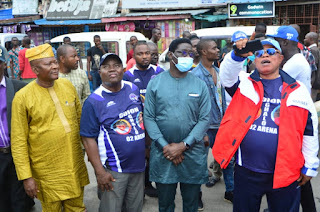